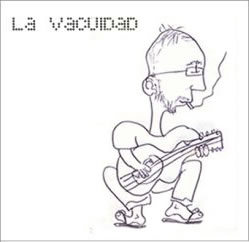 La Vacuidad
The name "La Vacuidad" is spanish meaning 'the emptiness'. That was pretty much the artist's state of mind when the album was completed in june 2002. All songs were recorded at that time at Mantería-Studios in Spain but some re-mixing was done later that year at Sredzki-Studios in Berlin, Germany. The cover drawing was done by Michelle Padilla.
La Vacuidad